The reason behind the creation of PS WxMap evolved over a couple years of me attempting to create maps in PowerPoint, overlaying elements onto a map that was just a screenshot of Google Earth, or now-a-days GREarth. I wanted full control over my maps, to be able to underlay items under states, counties, and cities, without a ton of work. I began to learn some of what Photoshop had to offer between 2007 and 2009, and by 2008 I had enough going to start MetGraphics (previously called “WxGraphics”). By 2012, I had the gist of everything setup and ready-to-go, tested out some maps for my own blog, and it was a massive improvement over the old maps I use to have to live with.

The map design/editing and GIS stuff was, and still is the toughest thing to update/edit in Photoshop… however, all of the external stuff included in the symbol pack was also quite the challenge, as there’s literally hundreds of elements in there, and of course still is as new content gets added from time-to-time. I’d love to hear of new, creative ideas anyone may have to add to the symbol pack, whether you own it by itself or have PS WxMap (it includes the symbol pack, if you don’t know/weren’t aware), I’d love to add some new things to keep it fresh!

Over the last couple of years, so many major improvements and overhauls have been made to the way PS WxMap is built, it’s unreal, and I wouldn’t have been able to do it without the several dozen users/supporters and their advice, comments, suggestions, and ideas for additions/edits/changes/updates of their own. Now dozens instead of hundreds or thousands of people using PS WxMap may sound miniscule to some, but honestly I never thought more than a few people would purchase it because of how hard it is to build and audience to get to show what they could create with this.

Now, of course it does need Photoshop experience to use, you’re not just going to be able to purchase this, throw it into Photoshop and create stunning maps instantly. It did take me a few years to really understand and use Photoshop to near it’s full capability (with still so much more I need to learn), but if you’re new to Photoshop, if you put your mind to it you could learn the majority of what you need to know within a couple weeks to a couple months depending how fast of a learner you are (I’m was slow to begin with).

Since PS WxMap was my first official product I made available, the work I put into it is very intensive and complex, however I do this to make it as easy as possible for you, the user, to use. I’ve put in probably hundreds of hours of work and testing into PS WxMap over the years, both to ensure ease of use in the end/final-product, as well as stability, which can be an issue when you’re working with a 300mb – 1gb .PSD (Photoshop document).

As a thanks to everyone’s support, and a welcome to potential new users, I’m making available sale through August 12th (a week from now), which will make everything in the mapping section cheaper, so that if you already have PS WxMap, you can pick up some additional/new content not included to use with PS WxMap. Click the image below to be linked to the page containing the on-sale content! 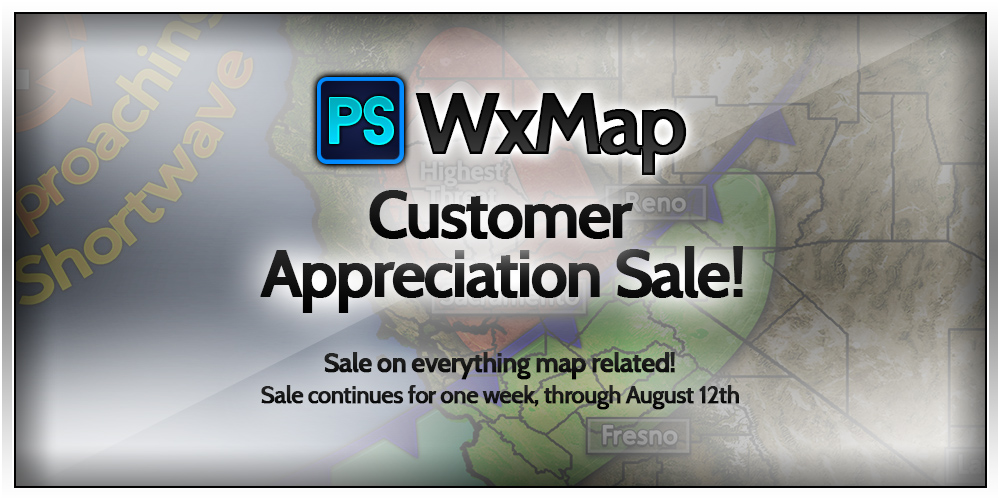 I’m also working to try to get forums operational – WordPress and some forum plugins haven’t been to easy to deal with and created a big mess behind the scenes over the last couple weeks. Over the last week, I just deleted all forum plugins, and plan to reinstall one to limit conflations. Anyway, have a good week, and thanks for the read!

MetGraphics.net is run by Tyler Young, a life-long meteorology “enthusiast” who’s wrote blogs on California storms since 2007. Over the past decade of writing, graphics have become an essential part of a forecast that draws in and retains a viewer – and it is that realization that lead to the creation of MetGraphics.

It started with a few personal forecast templates and maps to help create some local forecasts. A few years later, other forecasters across the U.S. and other corners of the world asked how they could obtain some of these graphics – and that is how MetGraphics.net was born.